In which we learn that Orko comes from a planet where the trees have a very unusual shape.

We find Adam, Man-at-Arms, Teela and Orko in the laboratory of the Palace, where Orko is reminiscing about how back on Trolla, he was a powerful sorcerer known as Orko the Great. He then starts messing about with a magic pyramid and some meteorites, and somehow this contrives to bring a female Trollan called Dree Elle to Eternia. Dree Elle recognises Orko as Orko the Great, much to Man-at-Arms’ chagrin, and then asks for help in defeating Dragoon, an evil monster. 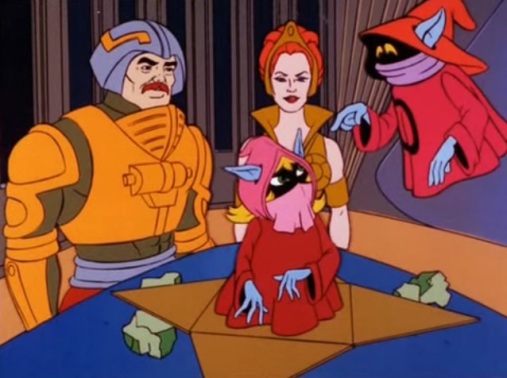 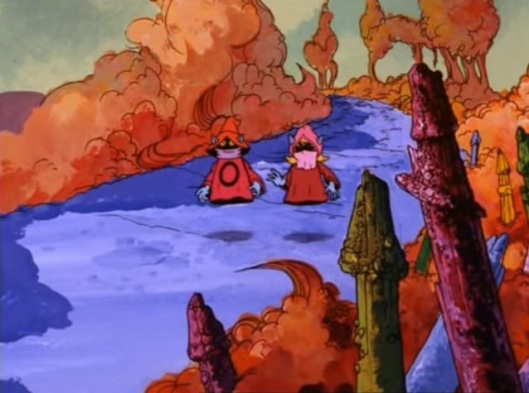 In the meantime, Adam has decided that Orko may need help, so he turns into He-Man and headed to Castle Grayskull to ask the Sorceress to transport him to Trolla. The Sorceress conjures up a portal to Trolla, but it’s really small. Rather than correcting this error, she tries to make out she meant to make it small, and gives He-Man the Sphere of Size, which allows him to get smaller as well. Going through the portal transforms He-Man and Battle-Cat back into Adam and Cringer, and they are unable to become He-Man and Battle-Cat again. 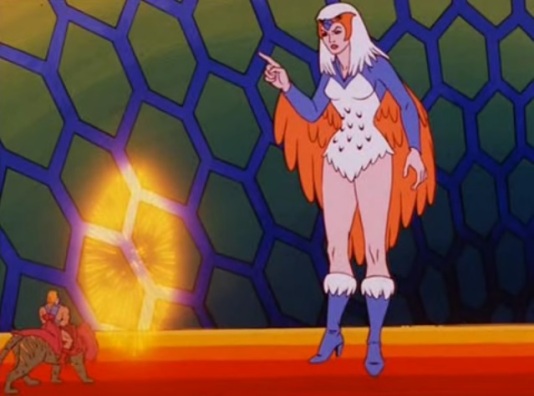 In a tenuous attempt to tie this story into our more usual outings, Dree Elle tells Orko that Dragoon was sent to Trolla by Skeletor. At this point, Dragoon shows up again and captures Dree Elle, while Orko meets up with Adam and Cringer. At Dragoon’s fortress, he reveals his evil plan to Dree Elle: he is draining the magical energy from the Trollans, and will transfer it to Skeletor when complete. 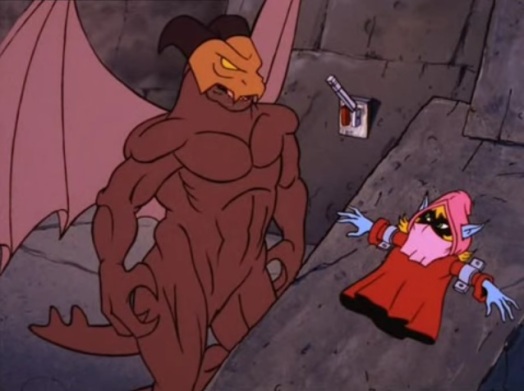 He-Man tackles Dragoon in a short fight, at the end of which Dragoon manages to tie himself up and throw himself into the Bottomless Hole of Trolla. You’d think that would be the end of that, but it transpires that the Bottomless Hole of Trolla is only about 15 foot deep, and thus He-Man and Battle-Cat are able to rescue Dragoon. This act of mercy prompts Dragoon to change his ways and work in the future for good. 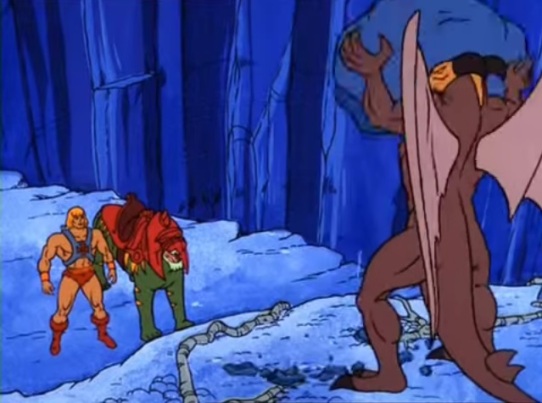 In the meantime, Orko heads into the fortress and finds Dragoon’s laboratory. His magic is unable to revive Dree Elle and the other Trollans imprisoned here, until He-Man shows up and tells Orko he has to believe in himself. This is of course the key to this particular conundrum, and Dree Elle wakes up.

While Orko is off screen, he shows Dree Elle his face – something Trollans only do to those they love. “It’s kind of like -” begins He-Man, about to explain to Battle-Cat about the birds and the bees, then he changes his mind and settles for “- like getting engaged.” He-Man, Battle-Cat and Cringer return to Eternia, with Orko promising to return for Dree Elle one day.

He-Man pops up to claim that this week, Orko had a difficult decision to make. I must have missed that, because I don’t recall any decisions at all, difficult or otherwise. But anyway, when you have a decision to make, perhaps you’d care to talk it through with your parents or best friend. Sound advice, He-Man. Thanks for sharing. 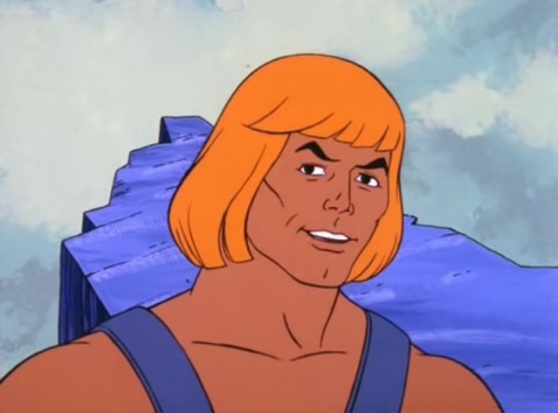 Couple of newbies today; we meet Dree Elle and Dragoon, as well as the more usual suspects of Prince Adam, Cringer, He-Man, Battle-Cat, Orko, the Sorceress, Man-at-Arms and Teela.

Excuse given for Prince Adam’s disappearance:

Adam strikes off on his own to head to Trolla, so there’s no need to offer implausible reasons to anyone today.

He-Man doesn’t actually say it, but I can see him thinking, “Christ, you’re useless” when the Sorceress conjures up a ridiculously small portal to Trolla.

Otherwise, the only insult here is He-Man calling Dragoon a “frog-face”. Really, He-Man? Really? This is the best you can muster? Dragoon does not have a frog’s face. If you’re hoping to prick him to the quick, this is really not going to get you there.

Egg on your face?

Within 10 seconds of the episode starting, Man-at-Arms has been sprayed with mud and water from one of Orko’s magic tricks. He definitely had it coming though: he was fiddling about with the magic pyramid, even after Orko told him not to. 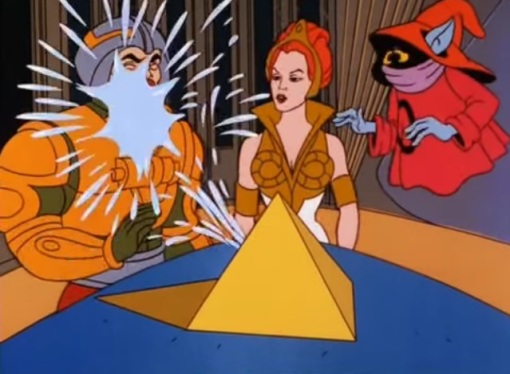 Does it have the Power?

Surprisingly for an Orko-centric episode, it actually does. It’s quite entertaining to get off Eternia to another world where the animators have free rein – and yes, I know we did that last week with Quest for He-Man, but that was completely nuts. Dawn of Dragoon, on the other hand, just about stays on the right side of sanity. It was a lot of fun to see Adam unable to become He-Man, and watching the cogs turn in Adam’s head as everyone repeatedly mentioned how Trolla was backwards was entertaining. In addition, Dragoon made a plausible baddy, though to be honest there was no real need to mention Skeletor. And to top it off, Orko and Dree Elle were written and acted without being infuriating. This episode is worth watching.

This site uses Akismet to reduce spam. Learn how your comment data is processed.