In which Prince Adam and Teela discover an invisible city full of sexist women.

This week we find Teela and Prince Adam heading to pay a visit to the lowland villages. Teela sees the journey as a chance to indulge in a long, unfocussed and unprovoked rant about the sexism inherent in Earth’s space exploration programme, while Adam seizes the chance to ignore her and go to sleep. 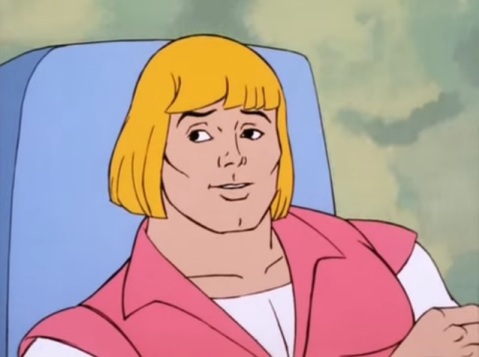 This happy journey comes to an abrupt halt when the Attack Trak bangs into something invisible blocking the path. Attempting to find out how far this barrier stretches, Adam comes across two women who accuse him of snooping round their city’s defences and put him in a cage, with his sword out of reach. They then make some disparaging remarks about men. Hands up who can see the moral coming here.

Teela runs into two more women and has better luck; she is invited to the city of Arcadia to meet Queen Sumana. En route, Teela asks whether there is also a king, to which the women react with at first disgust and secondly a fit of unconvincing laughter, followed by some crazed screeching and an inability to put their apparent distaste for men into words, culminating simply with “Men are just … you know?” 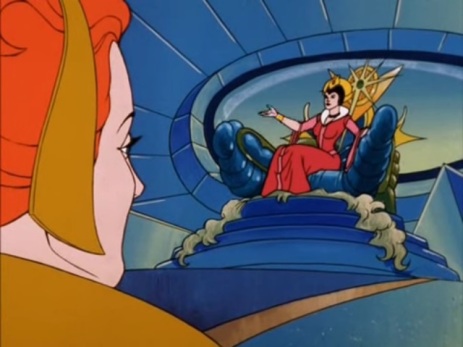 Sumana takes Teela on a tour of the city, explaining that Arcadia’s beauty is protected by a vast force dome, which keeps out intruders. On inquiring what powers the force dome, Teela discovers that all Arcadia’s men are set to work mining a mineral called arkalyte, which serves as the dome’s fuel. Sumana explains gently that while men are great at physical labour, women are more suited to rule, because they are better.

Meanwhile, Adam has been escorted into a nice dungeon, and his sword taken off to the Mistress of Arms. He meets a gentleman called Ananda who informs him that he is now a slave labourer in the arkalyte mines, to which Adam takes great exception and starts throwing machinery about. Nonetheless, soon he begins work and very quickly concludes that the mines are unstable and will collapse if mining continues.

Ananda tries to warn Sumana that if the mines collapse, the entire city will be destroyed, but she doesn’t want to know because he’s a man. Ananda then decides that maybe Adam will be able to convince Sumana. I have no idea why; Adam is a man too. Anyway, Ananda shows Adam the way up to the city, where he makes his way to the throne room and tries to explain about the mines. Predictably, Sumana doesn’t listen until the city starts collapsing.

Teela persuades Sumana to make the women and men work together to strengthen the city, prompting lots of realistic dialogue from the women like, “You know, I LIKE working with men!” In the meantime, Adam retrieves his sword and puts in a long-overdue He-Man appearance. He-Man indulges in one of his trademark ludicrous solutions: he digs down until he finds an underground lava flow, which then wells up into the mines and hardens, becoming a super solid foundation for Arcadia.

Later on, Sumana addresses the people of Arcadia, decreeing that henceforth women and men will be equals, and asks Ananda to rule by her side as king. Ananda’s only reaction to this is, “Well, it’s about time,” which I feel is a bit of an ungracious acceptance. Teela closes the episode by commenting that there’s a little difference between men and women, while Adam sits there with his legs wide akimbo. This may have been meant to emphasise the difference, which otherwise goes unspecified.

He-Man and Teela discuss the perils of inequality, in a rather confused segment that references the Magna Carta and various other laws throughout the ages. Nowhere do they mention sexism as such, and while it’s true there are many kinds of inequalities, I do feel that in an episode that’s been so ridiculously heavy-handed about sexism, it seems almost skirting the issue to not specifically denounce it in the moral.

Our regulars consist only of Prince Adam, He-Man, Teela, and a brief cameo from Orko. Guest appearances come from Sumana, Ananda, and loads of screeching women.

Excuse given for Prince Adam’s disappearance

He-Man’s appearance this week is so blink-and-you’ll-miss-it that there’s no call for an excuse. I assume they kept He-Man out of the picture because he’s so blatantly superior to everyone that Sumana would have had no choice but to acknowledge it.

Very disappointingly, no one does any insulting today. I’d have paid good money to hear Teela call Adam a chauvinistic pig, like she was clearly implying at the beginning.

Does it have the Power?

I don’t think so. For an episode that is attempting to tackle sexism, I feel that it dropped the ball rather in having the solution be He-Man come barrelling in and performing an immense feat of strength. It would have been much better if he could have kept his stupid muscley arms out of the whole proceedings and just encouraged the Arcadians to work together. Added to this, the dialogue presents a bit of a problem: I’m sure it had good intentions, but when it wasn’t corny like the example cited above, it gave out the wrong message entirely: Teela had a number of lines such as, “The men know what they’re talking about,” implying strongly that the women don’t. Ultimately, this is a heavy-handed and largely boring Episode With A Message. I’d avoid it if I were you.